The building that I made is a cabin in Atlanta. In my story, the boys are forced to take refuge in it while searching for their father. It is made out of cardboard, which I cut holes in and taped together. It’s an old, run down cabin whose last owner died in a gunfight. It’s also been around since the 1950s, so that’s why it has an old, beaten up look. Underneath the cabin is a room filled with old liquor that the alcoholic older brother is easily tempted to drink, because alcohol is how he escapes his problems. 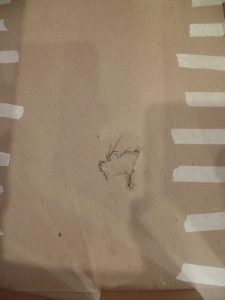