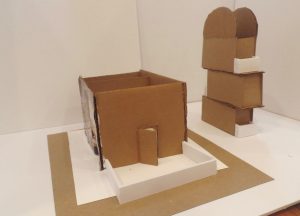 While doing architecture, I was not very inspired to do anything ‘otherworldly’ since my model was meant to represent my twine story. This story was very grounded to reality and didn’t include anything like magic or dragons; it was a thriller based on the life of someone I wanted to make seem real. The model represents the main protagonist’s (or antagonist depending on how you look at it) apartment complex. The first model was kind of zoomed into the top three floors since making all of them would be too time consuming. In making my models, I primarily used cardboard, which proved to be difficult to work with due to its stiff nature. On day 2, my model was made to represent the main protagonist’s apartment in the building, that of which was a studio meant to mimic one that might be found somewhere in NYC.  Both models are very enclosed, due to it being an apartment building, however, the studio showed openness what with most of the space being open to the public.  The largest challenge in architecture was manipulating the materials I used in order to properly represent what i envisioned.